Whale of a Good Time

It was a beautiful August day in Ketchikan, Alaska. I was hired to be the closing speaker for the Alaska Hospital and Healthcare Association on a cruise ship from Ketchikan to Juneau, where many of the attendees would catch their flights home. It had been a good convention in Ketchikan, and I was honored to be concluding the convention aboard what I’d imagined would be a luxury liner to Juneau.

The harbor was beautiful; however, instead of the nice, relaxing, luxurious cruise ship I’d envisioned, a big, old, drab-looking ferry creaked at the dock, and attendees from the conference were boarding it. Wait—would I really be speaking on that tub? Guess so! All right, then. No problem. I’m a professional, and all I need is a good mic and a place to stand. Right? I talked myself out of any concerns I may have.

So I boarded with our group, which was sharing the boat with many other tourists from around the world. Bon Voyage was only 10 minutes away; in another 20, it would be time for the closing speaker (me). Again, no problem! I’d have plenty of time to set up the stage and test the mic. Right? Let’s find that private room, pronto!

What a beautiful “blue sky” kind of day to motivate caregivers in Alaska! We left the dock, and now—with the clock swiftly ticking down to my speech—no one seemed to know where this private room could be hiding.

Suddenly, over a buzzing loudspeaker, a rough voice announced: “If you want to listen to the speaker, please come to the inside deck. If not, please move to the outside deck. If you do sit inside, please keep your conversation to a minimum.”

Keep your conversation to a minimum?

But what about my private room?

I was led to the front of the (very public) deck and was handed a “push-to-talk” two-way communication system. Worse, it was the same PA system our rough-voiced friend had used! And, as if that weren’t bad enough, I was then warned that I’d need to stop talking during the announcements. Not to worry, though—no one announcement would last longer than 30 seconds. Seriously? Yikes! Note to self: Don’t ever accept a speaking date on a big old drab-looking ferry with a loud, buzzing PA system.

So, there I was, out on an open deck on the beautiful Baring sea, clumsily holding a push-to-talk mic that could be interrupted at any moment, talking to an audience who focused mostly on the scenery, and painfully realizing that half of this audience had absolutely NO clue who I was or, for that matter, what all the hoopla was around this so-called Alaska Hospital and Healthcare Association. How could this possibly turn out well?

Had the entire talk lasted three minutes, I would have been fine. Let’s just say my thumbs should have had a personal trainer to prepare for this button-pushing marathon. Stay strong, I told myself. I still had 55 minutes to go in my 60-minute speech. And then, all of a sudden, a loud commotion rose off to my left near the window. People yelled and pointed, and then what seemed like the entire audience stood up, rushed to the window, and stood in awe at . . . a pod of whales jumping out of the water! They were playing feverishly, totally unaware of the speaker on the main deck trying to hold the attention of the audience. (Tell me, how do you compete with 11 whales a-jumpin’? You don’t.) So, if you can’t beat ’em, join ’em, right? Count the whales, win a prize, collect the whole set! 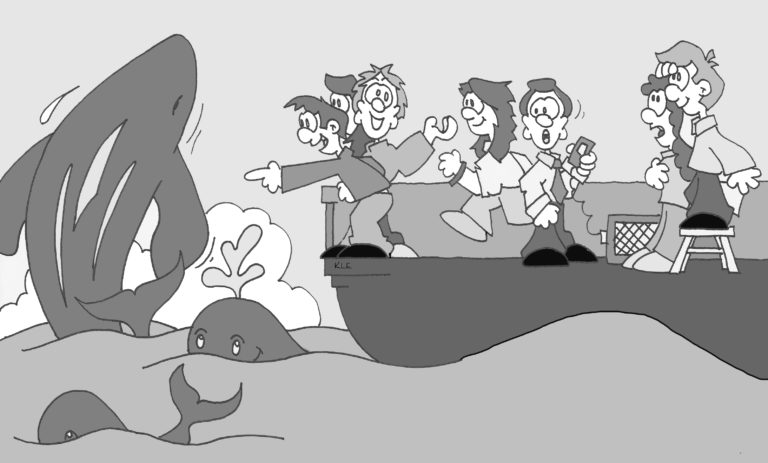 My dear audience was having a whale of a good time celebrating the spontaneity of one of Mother Nature’s finest moments. Who was I not to join in the fun? So I created a contest so see who could first spot new whales a-jumpin’. Not only did the conference members love it, but the rest of the travelers also became just as eager to get in on the fun. In truth, those whales saved me from the difficulty of the moment. Because I saw them as an opportunity rather than a nuisance, I was able to capture the moment for the benefit of everyone. And that just it: it’s all about creating that celebration mindset.

Sure, maybe it’s easier to find joy in jumping whales rather than in a sore thumb, but either way, you’ve got to consciously choose that celebration mindset.

So what does this mindset entail? It’s about finding the good in the present moment; it’s focusing on what you want more of in your life; it’s enjoying the journey, even when the journey doesn’t seem worthy of enjoying. It’s choosing to appreciate the moments—right along with those who share the moments with you.

That’s exactly what happened to me on that trip to Juneau! And now I have a NEW note to self: If you see a rickety (but well-built) boat creaking by the dock, make haste to board it! It’s just an opportunity to create a whale of a good time!

Join our   Community  and Keep the Celebration Coming

Help spread Christmas to displaced kids in Ukraine by giving them something to smile about!
https://gofund.me/c9cfeaa4

Looking back at the start of our @twcctw_org tour. What an awesome start with 550 attendees at the Malaysian leadership Summit. Thanks @Leaderonomics for your amazing commitment and ability to put butts in seats. https://www.instagram.com/p/CgimfkOhBSY/?igshid=YTgzYjQ4ZTY=