I’m lucky! I live in gratitude. I write about it, I speak about it and I remind myself every day what I’m grateful for. I’m an inherently positive person. Sure, happiness is a choice and I choose to be happy, but at times even with the best intentions, negative thoughts and events can quickly derail our happiness, if we let it.

I didn’t see it coming. It was early May, I was in Bangkok, doing what I love to do, bringing speakers from around the world to Southeast Asia to raise money and awareness for causes related to the empowerment of girls and women. 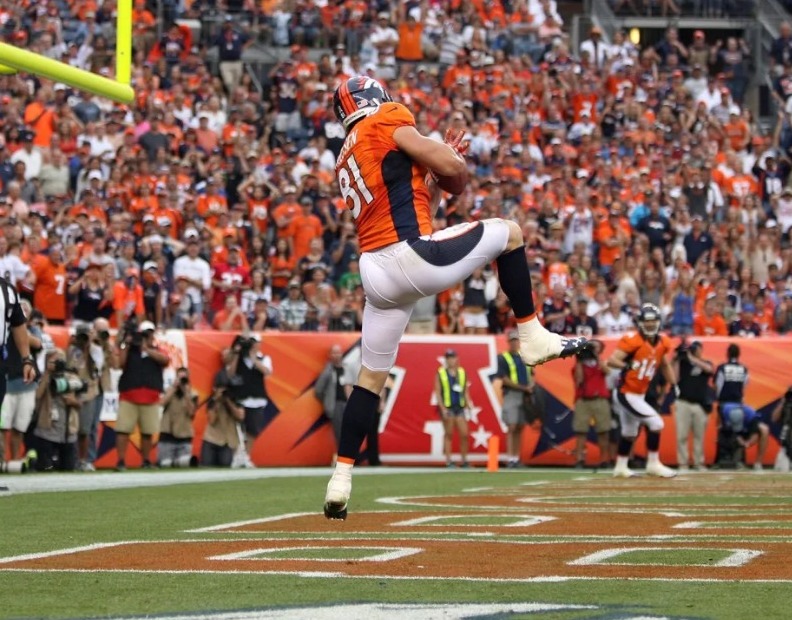 A client that I had promised Denver Broncos tickets to had e-mailed to confirm the game they would like to take their clients to. I realized I hadn’t received my tickets before I left the country, so my assistant followed up with a call. I got back a letter from the Denver Broncos Fan Club saying that they had not renewed my license due to my selling the entire season the year before. If I wanted to dispute the claim I could write back with my explanation.

What? Surely there must be a mistake. I have been a loyal Broncos fan my entire life since the very beginning in 1960 when my grandfather helped start the organization. Coincidentally, I was born in 1960 and my first words were ‘Go Broncos.’ Okay, maybe not, but you get the point, my family had been loyal fans since the beginning and I was lucky enough to control the family tickets when my dad moved to California.

Sure enough, I had sold the entire season the year before and had the Broncos organization assign my tickets to the lucky recipient for the year. It was hard for me to do, for I would not be able to give any tickets to friends, family, and charity as I have done in the past. Still, I chose to do it for that year. I’d be spending much more time in SE Asia preparing for Together We Can Change the World’s biggest undertaking event, Bersama Kita Boleh (Together We Can), in Kuala Lumpur, Malaysia, benefiting 10 important causes related to the empowerment of less fortunate girls and women. Apparently, my explanation, as well as that of a man who lost his mother to cancer and many other worthy claims, fell on deaf ears!

And thus my not-so-positive journey of flirting with anger started. Over the next 6 months, I found my thoughts migrating to the negative. I joined a Facebook group of angry fans who’d also had their season tickets taken away by the Broncos. There were many unfortunate stories and most of all anger at the Broncos for their inappropriate, careless behavior. And we all know what happens when we surround ourselves with negative people that fill our minds with negative thoughts. You got it; we become more negative.

Then a few days before opening day, another fan whose season tickets had been taken away alerted me that he found my season tickets on Ticketmaster at over double the face value price. That’s right, the Broncos organization was selling my seats for the opening game against the LA Chargers for over $400 a seat. The Broncos had said the reason for taking back tickets was so that they could give those who had been on the waiting list for season tickets a chance to become season ticket holders. What you saw happening was much different. They were selling long-time season ticket holders tickets all over Ticketmaster for inflated prices. So sad. Once again, angry thoughts dominated my mind. What to do?

Now it was up to me. I could continue to hold on to this anger and let the Broncos organization control my emotions and steal my day-to-day happiness, or I could choose other thoughts.

I believe that the quickest way to get rid of anger, resentment, or any other negative emotion is to switch your thoughts from negativity to gratitude. It’s the ability to let go of negative emotions and instead access a mental list of that which you are grateful for. The reward? You’ll have more peace and happiness in your day-to-day life. Not a bad payoff, right?

I know, I know it’s much easier said than done, but like anything in life, practice and positive intent can surely move you in the right direction. Asking yourself the question, would you rather be right or would you rather be happy? Sure, I could go on fighting and doing my best to prove the Broncos wrong, or I could move on to focus on life’s many blessings.

Did it bring me any satisfaction that the Broncos had their worst season in over a decade after pulling such a stunt on season ticket holders? Okay, maybe a little—knowing that karma possibly had a hand in trying to teach a misguided organization a little lesson about greed and civility.

And the lesson for me in all of this: it all starts with your thoughts.

Join our   Community  and Keep the Celebration Coming

Help spread Christmas to displaced kids in Ukraine by giving them something to smile about!
https://gofund.me/c9cfeaa4

Looking back at the start of our @twcctw_org tour. What an awesome start with 550 attendees at the Malaysian leadership Summit. Thanks @Leaderonomics for your amazing commitment and ability to put butts in seats. https://www.instagram.com/p/CgimfkOhBSY/?igshid=YTgzYjQ4ZTY=